Full Name
Amanda Randles
Job Title
Assistant Professor
Company
Duke University
Brief Biography
Amanda Randles is the Alfred Winborne Mordecai and Victoria Stover Mordecai Assistant Professor of Biomedical Sciences at Duke University. She has courtesy appointments in the departments of Mechanical Engineering and Material Science, Computer Science and Mathematics, and is a member of the Duke Cancer Institute. Amongst other recognitions, she has received the ACM Grace Murray Hopper Award, IEEE-CS Technical Consortium on High Performance Computing (TCHPC) Award, the NIH Director’s Early Independence Award, the LLNL Lawrence Fellowship, and the ACM/IEEE George Michael Memorial High Performance Computing Fellowship. She was also named to the World Economic Forum Young Scientist List and to MIT Technology Review's Innovators Under 35, and she is a Senior Member of the National Academy of Inventors.

Amanda received her PhD in Applied Physics from Harvard University as a DOE Computational Graduate Fellow and NSF Fellow. Before that, she received her Master’s degree in Computer Science from Harvard University and her Bachelor’s degree in Computer Science and Physics from Duke University. Prior to graduate school, she worked as a software engineer at IBM on the Blue Gene supercomputing team. She has contributed over 60 peer-reviewed papers, over 100 granted US patents, and had over 100 pending patent applications.
Speaking At
Case Study: HPC for Ventilator Splitting During Covid-19 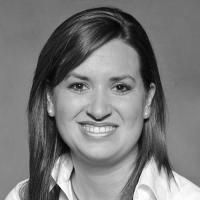