Full Name
Timnit Gebru
Company
Independent Scholar
Brief Biography
Dr. Timnit Gebru is a researcher in artificial intelligence, working to reduce the potential negative impacts of AI. Until her recent firing from Google, which ignited a labor movement resulting in the first union to be formed by tech workers at Google, Timnit co-led the Ethical Artificial Intelligence research team. Prior to her work at Google, she did a postdoc at Microsoft Research, New York City in the FATE (Fairness Transparency Accountability and Ethics in AI) group, where she worked on algorithmic bias and the ethical implications underlying projects aiming to gain insights from data.

Prior to her PhD, Timnit worked at Apple, designing circuits and signal processing algorithms for various Apple products, including the first iPad. She then spent one year as an entrepreneur. After experiencing the dire lack of representation in the field of artificial intelligence, Timnit Gebru co-founded the non profit Black in AI, which works on initiatives to increase the presence, visibility, and wellbeing of Black people in the field of AI.

Timnit’s work has been covered by outlets ranging from the New York Times to The Economist, and she has been named to notable lists such as the Bloomberg 50, Wired 25, and Forbes 30 inspirational women. Most recently, she was awarded the Electronic Frontier Foundation’s pioneer award along with Joy Buolamwini and Deborah Raji.
Speaking At
Can We Trust Tech to Police AI? 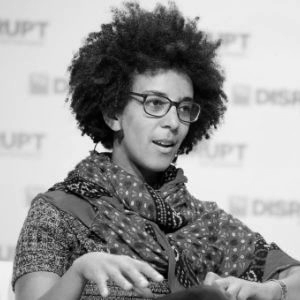